This morning, the Region of Waterloo announced that it has reached a settlement with the greenfield developers who appealed the Region’s new Official Plan to the Ontario Municipal Board. 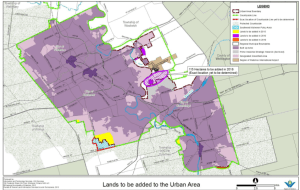 A map released by the Region, showing changes based on the settlement agreement.

The agreement, which still must be approved by the OMB, would open up 255 hectares of new land to settle the original dispute, with an additional 198 hectares in the coming years to accommodate new higher population growth projections. Developers had asked for 1053 hectares of new land for urban development to 2031.

While this is a compromise, it’s a good compromise that will allow us to move forward with smart growth approaches in our community. It will help protect our farmland and environmentally sensitive areas, while allowing us to encourage more people and jobs in built-up areas to create more liveable urban areas.

As many of you know, in January of 2013 the OMB ruled against crucial smart growth provisions of the Region’s Official Plan, and threatened key provisions of the province’s Places to Grow Growth Plan covering much of Ontario. The Region has been fighting this dangerous decision in provincial court, with the support of the provincial government, as well as pursuing a negotiated settlement. (Read more about the OMB decision.)

This deal means we won’t have to rely on the unpredictable court system to fix the mess left by the OMB, and can move forward sooner with a locally-designed solution.

You can see the Region’s press release on the deal here, and their full report here.

You can also check out our press release.

Congratulations to all those at the Region of Waterloo who have been working so hard on this deal, and to all of you for your ongoing support of our community’s smart growth vision. Our community’s dedication has been a crucial part of this success.