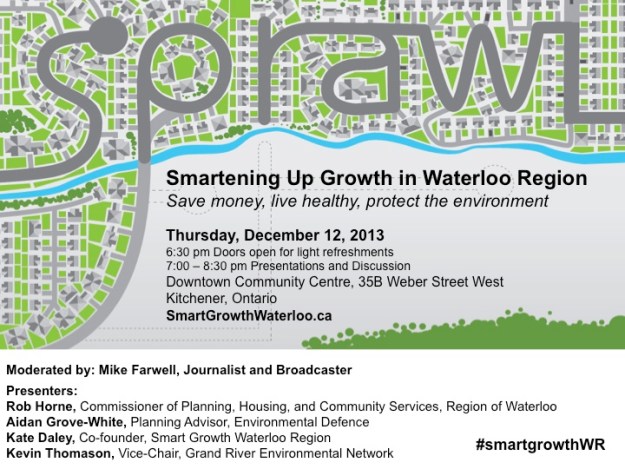 We’re joining with Environmental Defence and the Grand River Environmental Network (GREN) to host an event about the costs of sprawl and the benefits of smart growth in Waterloo Region.

We’re thrilled to have local journalist and broadcaster Mike Farwell as our moderator for the evening, and a panel that will include:

Use Facebook to let us know you’ll be joining us, and we’re looking forward to seeing you there.

Mike Farwell is a veteran of radio and television broadcasting, having worked in British Columbia, northern Ontario, and Waterloo Region over the past 18 years. He has covered Queen’s Park, municipal politics, and current affairs. After more than a decade as a news reporter and talk show host, Mike now keeps busy as the co-host of the morning show at Country 106.7, an analyst for Kitchener Rangers hockey, and with a monthly column that appears in the Kitchener Post. Mike is a trustee with the Kitchener Public Library board and a member of the City’s Safe and Healthy Communities advisory committee. He also volunteers with Oktoberfest and Cystic Fibrosis Canada.

Rob Horne is the Commissioner of Planning, Housing and Community Services for the Region of Waterloo.  His responsibilities include development review and approvals, transportation and transit planning, Regionally-owned cultural sites, township libraries and community housing.  Rob also serves as the Chief Executive Officer of the Region of Waterloo’s Community Housing Corporation and is the Chair of the Regional Planning Commissioners of Ontario. Rob holds undergraduate and graduate degrees from the University of Waterloo, a diploma in Public Administration from the University of Western Ontario, and is a Registered Professional Planner.

Aidan Grove-White is a Planning Advisor for Environmental Defence. Aidan grew up in downtown Toronto and has been active in the environmental movement since childhood. As a youngster, he organized petitions in elementary school, and attended environmental camp every summer. After earning his BA at the University of Victoria, Aidan worked for several not-for-profit organizations as well as the British Columbia and Ontario governments. Aidan has always had a love for urban regions and a drive to see them work better for residents, so it was natural that the next step in his career was to enroll in the University of Toronto’s M.Sc. in Planning. Aidan’s is passionate about community building, sustainable urban development and the natural systems that sustain our quality of life.

Kate Daley is a co-founder of Smart Growth Waterloo Region, a grassroots advocacy group formed to oppose the Ontario Municipal Board’s January ruling against the Region of Waterloo’s Official Plan. She is a life-long resident of Waterloo, where she was introduced to community advocacy through the successful struggle to prevent the proposed closure of her downtown high school. Her recent community advocacy has focused on responsible land-use planning, transportation choice, and education. Kate is pursuing a PhD in Political Science at York University, where she studies issues of gender and power in political theory, and where she teaches undergraduate students about how and why politics works the way it does.

Kevin Thomason is Vice-Chair of the Grand River Environmental Network (GREN). He has worked in the technology and marketing fields for Apple Computer, KPMG, Quarry Communications and most recently as the co-founder of a leading Web 2.0 start-up in the field of information filtering, helping people deal with information overload. Concerned with rampant growth on the Waterloo Moraine, Kevin volunteered full-time from 2004 to 2007 to help develop a Greenbelt Plan. Kevin and hundreds of community volunteers succeeded in getting the unanimous approval of eight municipal and regional councils to pioneer a new environmentally-sensitive landscape protection framework for the protection of  more than 10,000 acres of the most threatened and critical lands in Waterloo Region.

2 thoughts on “Event: Smartening Up Growth in Waterloo Region”